Skip to content
Britain's Got Talent with Simon Cowell

I’ve watched Simon Cowell for years and never thought so, but does Simon Cowell need a cushion to look taller?  You be the judge.  He’s sitting on a cushion in the picture below, so it’s hard to judge without seeing him without the cushion.  Check it out and let us  know what you think.

Through the show “Britain’s Got Talent,” music mogul Simon Cowell gives lucky newcomers a boost. It appears he’s also getting some help himself: A photo by the Sun of the judge’s seat at show auditions in Glasgow revealed Simon’s chair to have an extra pillow. A rep for the show has downplayed the evidence.

The sharp-tongued Cowell isn’t afraid to lay on the critiques but seems to be sensitive to his own personal shortcoming: his size. At about 5-foot-9 unaided, the celebrity judge looks to be attempting to keep up with his taller co-judge.

This wouldn’t be the first time Cowell has added to his height in sneaky ways — he has been photographed in chunky Cuban heels, which give him some extra inches. The 53-year-old’s spiky hairstyle might also help give the star a little lift. 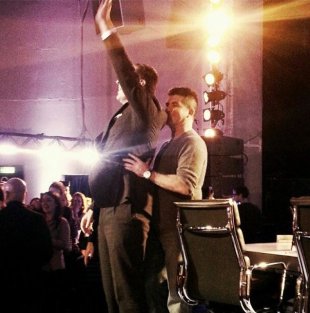 A Twitter photo of David Williams and Simon CowellTaking his booster seat next to the other judges on the show, Cowell seems to be the same height as fellow judge David Williams, who is a towering 6-foot-2. Cowell appears dwarfed by Williams in a shot of them standing. But seated, the two look to be about the same height.

Despite all the apparent evidence to the contrary, Cowell is trying to downplay talk of his booster seat. A spokesperson for the show told the MailOnline: “He is using a cushion for comfort.”

Does Simon Cowell need a cusion to look taller?  I don’t think so.  I don’t know what the big deal is, do you?  What do you think about Simon Cowell’s height? Let us know below.